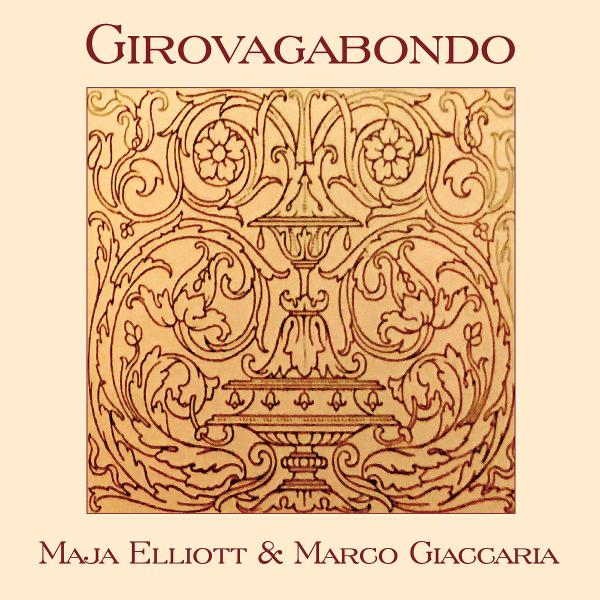 To buy the album, please visit Maja's page on Bandcamp.

My music is born out of a love of Ethnic Music, especially Traditional Gaelic and Slavic Music, my passion for North-Indian Classical Music and the synergy between creative and improvised music from the Jazz and Rock tradition. Listening to these recordings after more than 20 years, these were magical days making music. Marco Giaccaria

Medieval castles wrapped in a shroud of clouds, majestic Torino with its Savoy palaces, buskers, jugglers and storytellers weaving stories as long and free flowing as the river Po… All this became possible after Maurizio Marcellino generously invited me to Borgone di Susa and introduced me to Marco. I remember singing Sesame Street in Italian with the late Beppe Finella and Marcella Pischedda! Their Associazone Girovagarte inspired the title of the album. Beppe, a gifted guitarist and composer, prompted me to follow my musical path.
Marcella, a true Italian troubadour, performed in street festivals with her Piedmont folk songs and her hurdy gurdy. They introduced me to jugglers Luca and Tina. Touring mediaeval jousting festivals in Luca’s bus with Ivan, learning italian, busking in piazzas in Tuscany, waking up to the heat of the morning sun on the metal roof were some of the most enjoyable moments of my life. I’m grateful to Federica who invited me to sing on a jazz programme Canal 1 in Genova. Thanks to you all – and to the richness of Piedmont, to the Franco-Italian folklore and to American clown Philip Radici. Special thanks to Franco for his warmth and generosity and for lovely memories of cycling two on a bike from the market with fresh succulent persimmons, ready to burst. Maja Elliott

To buy the album, please visit Maja's page on Bandcamp.

Girovagabondo: 4 tracks played on the broadcast Blue of the Night on 12th of april 2021, RTÉ Lyric FM (Irish national radio and television) by Bernard Clarke

This is the audio (program's part only) with the transcription of the presentation by Bernard Clarke:

English composer, but resident here, Maja Elliott and Marco Giaccaria have just released Girovagabondo, Recorded and mixed by Marco between 1999 and 2021 in Italy. The press release on Bandcamp from Maja evokes in her note there former exciting times in Italy, some of which perhaps colour the music here. For me this is a brilliant survey of music, of a collaboration made over 2 decades. Both musicians are improvisers, both know the world of jazz very intimately and very well, but I think it’s more than that. Now I don’t know if Maja Elliott or Marco Giaccaria set out to actually evoke events and the like in and around Turin In Italy, but the music is full of bright Italian colours in general and can quickly pull a listener in. The album opens with the protean Chinese Song. Marco’s sound soars mellifluously, he’s a flautist but Maja Elliott, almost jazzy style, on piano and vocals abounding with a great sense of poetry, combined with great dexterity from both players. This is kind of ‘Liquid music making’ in a sense it’s constantly shifting round a central point and that’s what’s so intriguing about it for me at least, and then the following piece which were going to follow with here, Marcus, is different again, transports us to yet another realm, it shows off some of the diversity of this album.

The repetitive sound of the instruments there in Marcus, voice, piano and flute, a rich bed of repetitive incantation, it’s as if sound is poetry for them. There’s more of reverie in a work like Il Sorriso del Silenzio, though that ethereal start gets the rug pulled from under it as Maja Elliott lays a kind of jagged bed of beats on the piano perfectly juxtaposing the former lyrical flute. Another moment on this album, it’s a very short one, it’s a very beautiful miniature, Truth. A very sensual and melancholic portrait of a moment. It’s again Poem like and William Carlos Williams, the great American poet and Imagism comes to mind here.

Truth and Il Sorriso del Silenzio. Once again, 2 more pieces by Maja Elliott and Mårco Giaccaria’s Girovagabondo. This is a wonderfully diverse journey into a collaboration and a love in my opinion of Italy. It’s no mere travel album by the way, it’s not a postcard collection. It’s very imaginatively programmed and there’s an innovative choice of arrangements at times, so it makes for a fascinating sequence to listen to.


Here is the link to listen the complete broadcast: